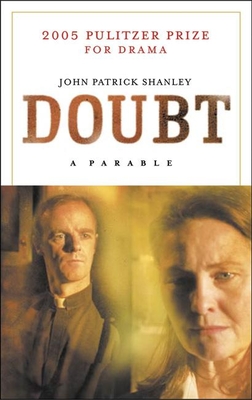 "A superb new drama written by John Patrick Shanley. It is an inspired study in moral uncertainty with the compellingly certain structure of an old-fashioned detective drama. Even as Doubt holds your conscious attention as an intelligently measured debate play, it sends off stealth charges that go deeper emotionally. One of the year's ten best."--Ben Brantley, The New York Times

" The] #1 show of the year. How splendid it feels to be trusted with such passionate, exquisite ambiguity unlike anything we have seen from this prolific playwright so far. Blunt yet subtle, manipulative but full of empathy for all sides, the play is set in 1964 but could not be more timely. Doubt is a lean, potent drama . . . passionate, exquisite, important, and engrossing."--Linda Winer, Newsday

Chosen as the best play of the year by over 10 newspapers and magazines, Doubt is set in a Bronx Catholic school in 1964, where a strong-minded woman wrestles with conscience and uncertainty as she is faced with concerns about one of her male colleagues. This new play by John Patrick Shanley--the Bronx-born-and-bred playwright and Academy Award-winning author of Moonstruck--dramatizes issues straight from today's headlines within a world re-created with knowing detail and a judicious eye. After a stunning, sold-out production at Manhattan Theatre Club, the play has transferred to Broadway.

John Patrick Shanley is the author of numerous plays, including Danny and the Deep Blue Sea, Dirty Story, Four Dogs and a Bone, Psychopathia Sexualis, Sailor's Song, Savage in Limbo, and Where's My Money?. He has written extensively for TV and film, and his credits include the teleplay for Live from Baghdad and screenplays for Congo, Alive, Five Corners, Joe Versus the Volcano (which he also directed), and Moonstruck, for which he won an Academy Award for original screenplay.

John Patrick Shanley is from the Bronx. He was thrown out of St. Helene's kindergarten, banned from St. Anthony's hot lunch program and expelled from Cardinal Spellman High School. When asked why he had been treated in this way, he burst into tears and said he had no idea. Then he went into the Marine Corps. He did fine. He is still doing ok.