The Pact: Three Young Men Make a Promise and Fulfill a Dream (Paperback) 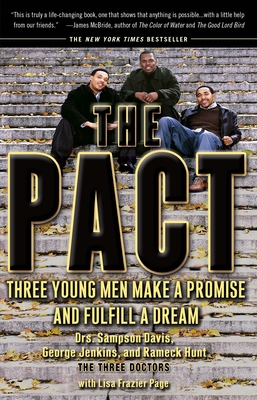 The Pact: Three Young Men Make a Promise and Fulfill a Dream (Paperback)

A remarkable story about the power of friendship.

Chosen by Essence to be among the forty most influential African Americans, the three doctors grew up in the streets of Newark, facing city life’s temptations, pitfalls, even jail. But one day these three young men made a pact. They promised each other they would all become doctors, and stick it out together through the long, difficult journey to attaining that dream. Sampson Davis, George Jenkins, and Rameck Hunt are not only friends to this day—they are all doctors.

This is a story about joining forces and beating the odds. A story about changing your life, and the lives of those you love most... together.

George Jenkins, Sampson Davis, and Rameck Hunt grew up together in Newark and graduated from Seton Hall University. Davis and Hunt received their medical degrees from the Robert Wood Johnson Medical School, and Jenkins received his dentistry degree from the University of Medicine and Dentistry. The three doctors are the recipients of the Essence Lifetime Achievement Award. All three continue to live in Newark.

Lisa Frazier Page is a national award-winning writer for The Washington Post.
"Sampson Davis, Rameck Hunt, and George Jenkins-- M.D., M.D., and D.M.D., respectively-- are something more than the sum of their degrees." --Newsday

"[A] prescription for success." --The Philadelphia Enquirer

"Eye-opening and moving... The Pact is a lesson in the power of peers." --The Atlanta Journal-Constitution

"A powerful message of hope to inner-city youngsters." --The Dallas Morning News

"While their story is sometimes tragic, sometimes funny and sometimes remarkable, it is always inspirational." --St. Louis Post-Dispatch

"Will inspire and entertain... The Pact is the impressive true story of three teenag boys from Newark, New Jersey, who became outstanding men." --Essence

"Starkly honest... a dramatic firsthand narrative detailing how each doctor managed to rise above the ills of city life-- violence, drugs and poverty-- to achieve what once seemed like a far-fetched dream." --The Newark Star-Ledger

"It is probably the most important book for African-American families that has been written since the protest era... Get The Pact. It just may change a teen's future." --Chicago Sun-Times