The Apocalypse of Settler Colonialism: The Roots of Slavery, White Supremacy, and Capitalism in 17th Century North America and the Caribbean (Paperback) 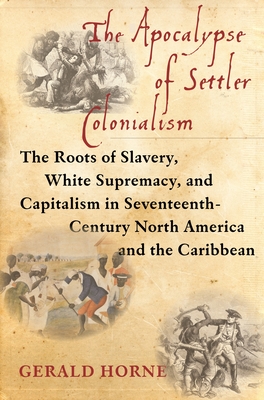 The Apocalypse of Settler Colonialism: The Roots of Slavery, White Supremacy, and Capitalism in 17th Century North America and the Caribbean (Paperback)

Virtually no part of the modern United States--the economy, education, constitutional law, religious institutions, sports, literature, economics, even protest movements--can be understood without first understanding the slavery and dispossession that laid its foundation. To that end, historian Gerald Horne digs deeply into Europe's colonization of Africa and the New World, when, from Columbus's arrival until the Civil War, some 13 million Africans and some 5 million Native Americans were forced to build and cultivate a society extolling "liberty and justice for all." The seventeenth century was, according to Horne, an era when the roots of slavery, white supremacy, and capitalism became inextricably tangled into a complex history involving war and revolts in Europe, England's conquest of the Scots and Irish, the development of formidable new weaponry able to ensure Europe's colonial dominance, the rebel merchants of North America who created "these United States," and the hordes of Europeans whose newfound opportunities in this "free" land amounted to "combat pay" for their efforts as "white" settlers.

Centering his book on the Eastern Seaboard of North America, the Caribbean, Africa, and what is now Great Britain, Horne provides a deeply researched, harrowing account of the apocalyptic loss and misery that likely has no parallel in human history. The Apocalypse of Settler Colonialism is an essential book that will not allow history to be told by the victors. It is especially needed now, in the age of Trump. For it has never been more vital, Horne writes, "to shed light on the contemporary moment wherein it appears that these malevolent forces have received a new lease on life."
Gerald Horne is Moores Professor of History and African American Studies at the University of Houston, and has published three dozen books including, The Counter-Revolution of 1776: Slave Resistance and the Origins of the USA and Race War! White Supremacy and the Japanese Attack on the British Empire.