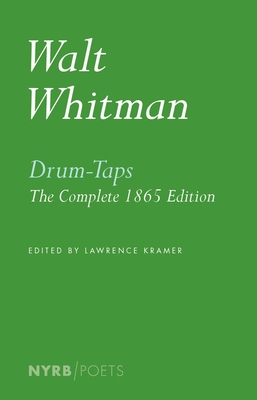 Walt Whitman worked as a nurse in an army hospital during the Civil War and published Drum-Taps, his war poems, as the war was coming to an end. Later, the book came out in an expanded form, including “When Lilacs Last in the Dooryard Bloom'd,” Whitman's passionate elegy for Lincoln. The most moving and enduring poetry to emerge from America’s most tragic conflict, Drum-Taps also helped to create a new, modern poetry of war, a poetry not just of patriotic exhortation but of somber witness. Drum-Taps is thus a central work not only of the Civil War but of our war-torn times.

But Drum-Taps as readers know it from Leaves of Grass is different from the work of 1865. Whitman cut and reorganized the book, reducing its breadth of feeling and raw immediacy. This edition, the first to present the book in its original form since its initial publication 150 years ago, is a revelation, allowing one of Whitman’s greatest achievements to appear again in all its troubling glory.

Walt Whitman (1819–1892) revolutionized American poetry through the eleven editions of his magnum opus, Leaves of Grass, a celebration of the dynamism and diversity of a still-young America. Drum-Taps, first published in 1865, was written out of his experience as a nurse during the Civil War. It is a collection, he once wrote in a letter to a friend, “put together by fits and starts, on the field, in the hospitals as I worked with the soldier boys.”

Lawrence Kramer is an author and composer who has often addressed Whitman’s poetry in both capacities. He has set several of the poems from Drum-Taps to music and edited the essay collection Walt Whitman and Modern Music. Kramer is Distinguished Professor of English and Music at Fordham University.

“Elegantly edited… the resurfacing of Drum-Taps for the first time in a century and a half serves as a timely reminder that Whitman was not so much reveling in the carnage of a country divided – a charge leveled at him in recent years – as hoping that, in his poetry, readers would find the moral resources for what needed to come next: national reconstruction, in the most profound sense… the book’s republication for the first time in 150 years is an invitation to recognize anew that the America he sang about remains, for better and for worse, our own.” —Richard Kreitner, The Boston Globe

“The collection now published in its entirety is indispensable…the poems of Drum-Taps reveal a Whitman driven by a new formal intensity, one met, too, by a perhaps more permeable self both stretched and pressurized by his consolatory experience of the war….we can almost hear the sound of the poems in his head.” —Jonathan Sturgeon, FlavorWire

“Drum-Taps delivers my ambition of the task that has haunted me, namely, to express in a poem…the pending action of this Time & Land we swim in, with all their large conflicting fluctuations of despair & hope, the shiftings, masses, & the whirl & deafening din…& then an undertone of sweetest comradeship and human love, threading its steady thread inside the chaos…” —Walt Whitman, letter to William D. O’Connor, January 6, 1865

This feature require that you enable JavaScript in your browser.
END_OF_DOCUMENT_TOKEN_TO_BE_REPLACED

This feature require that you enable JavaScript in your browser.
END_OF_DOCUMENT_TOKEN_TO_BE_REPLACED

This feature require that you enable JavaScript in your browser.
END_OF_DOCUMENT_TOKEN_TO_BE_REPLACED

This feature require that you enable JavaScript in your browser.
END_OF_DOCUMENT_TOKEN_TO_BE_REPLACED