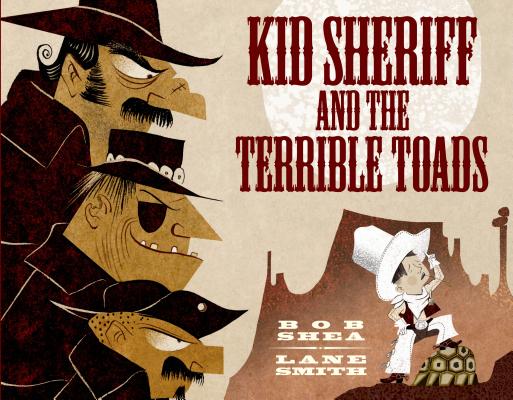 Then hope rides into town. Sheriff Ryan might only be seven years old, and he might not know much about shooting and roping. But he knows a lot about dinosaurs. Yes, dinosaurs. And it turns out that knowing a thing or two about paleontology can come in handy when it comes to hoodwinking and rounding up a few no-good bandits. From Bob Shea and Lane Smith comes this hilarious picture book, Kid Sheriff and the Terrible Toads.

This title has Common Core connections.

Bob Shea has written and illustrated more than a dozen picture books, including Dinosaur vs. Bedtime, and is the author of Kid Sheriff and the Terrible Toads and Big Plans, both illustrated by Lane Smith. His writing career began at Comedy Central, and his characters and animations have appeared on Nick Jr., Playhouse Disney, and PBS Kids.

Lane Smith has written and illustrated a bunch of stuff, including the Kate Greenaway Medalist There Is A Tribe of Kids, and A Perfect Day.

He is also the author of the middle-grade novel Return to Augie Hobble, as well as author and illustrator of Caldecott Honor book Grandpa Green and runaway New York Times bestseller It's a Book which has been translated into over twenty languages. His other works include the national bestsellers Madam President and John, Paul, George & Ben. His titles with Jon Scieszka have included the Caldecott Honor winner The Stinky Cheese Man; The True Story of the 3 Little Pigs; Math Curse; and Science Verse. Lane's other high profile titles include Hooray for Diffendoofer Day! by Dr. Seuss and Jack Prelutsky; The Very Persistent Gappers of Frip by George Saunders; Big Plans by Bob Shea; and James and the Giant Peach by Roald Dahl. In 1996, Lane served as Conceptual Designer on the Disney film version of James and the Giant Peach.

In 2012, the Eric Carle Museum named him a Carle Artist for "lifelong innovation in the field of children's picture books," and in 2014, he was awarded the lifetime achievement award from the Society of Illustrators. He lives in rural Connecticut with the designer Molly Leach.

“*Shea's broad parody of matinee Westerns is a readaloud delight . . . This is, without question, the best dinosaur book with no dino-saurs in it.” —BCCB, STARRED REVIEW