The Life and Legend of Wallace Wood Volume 1 (Hardcover) 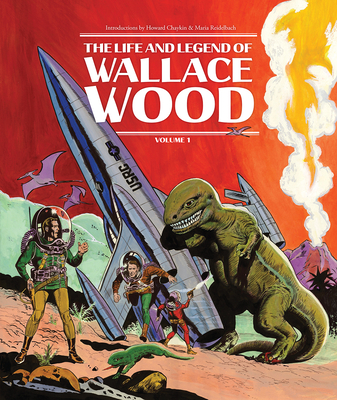 The Life and Legend of Wallace Wood Volume 1 (Hardcover)

This biography is an incisive look at the life and career of one of the greatest and most mythic comic book creators—the maddest artist of Mad magazine, the man behind Marvel’s Daredevil, and self-publishing pioneer of Witzend—Wallace Wood.

Who was Wallace Wood? The maddest artist of Mad magazine? The man behind Marvel’s Daredevil? His World is an incisive look back at the life and career of one of the greatest and most mythic figures of cartooning. Edited over the course of thirty years by former Wood assistant Bhob Stewart, His World is a biographical portrait, generously illustrated with Wood’s gorgeous art as well as little-seen personal photos and childhood ephemera. Also: remembrances by Wood’s friends, colleagues, assistants, and loved ones. This collective biographical and critical portrait explores the humorous spirit, dark detours, and psychological twists of a gifted maverick in American pop culture.

Bhob Stewart (b. 1937, Kirbyville, Texas, d. 2014, Plymouth, Massachusetts) divided his time between mass and fan media. He was chiefly a writer and editor, although he also drew and acted. He is best known for founding one of the first comics fanzines, EC Fan Bulletin, in 1953; for coining the term “underground comics”; and for art-directing the Hugo Award-winning science fiction fanzine Xero. Stewart invented the Wacky Packages trading card series for Topps, and wrote comics for clients such as Marvel and Heavy Metal. He worked in Wallace Wood’s studio for a time, and became the de facto steward of the influential EC cartoonist’s legacy. Co-author of Scream Queens with Calvin Beck, he edited the Mad Style Guide, and co-edited the seminal underground comics tabloid Gothic Blimp Works?. As an educator, he taught courses in Boston and at the School of Visual Arts in New York.

William Maxwell "Bill" Gaines (b. 1922, d. 1992) inherited EC Comics in the 1950s. Under his stewardship, it shifted focus from "educational" to "entertaining." He began publishing and editing (and often, co-plotting the stories in) genre comic books, including Tales from the Crypt, Mad, and more. He hired creators such as Jack Davis, Harvey Kurtzman, Al Feldstein, Wallace Wood, and others; thanks to them, EC comics are considered one of the medium's high water marks. He testified infamously at the Senate Subcommittee for Juvenile Delinquency, which led to the Comics Code and the censorship of many of EC's titles. In response, Gaines turned Mad into a magazine, and published it for the next forty years. He was inducted into the Will Eisner Hall of Fame in 1993.

Retired underground cartoonist and current comics historian Trina Robbins has been writing graphic novels, comics, and books for almost half a century. Her subjects have ranged from Wonder Woman and The Powerpuff Girls to her own teenage superheroine, GoGirl!, and from women cartoonists and superheroines to women who kill. She's won an Inkpot Award and was inducted in the Will Eisner Hall of Fame at the San Diego Comic-Con. She lives in a moldering, 100+-year-old house in San Francisco with her cats, shoes, and dust bunnies.

Al Williamson (b. 1931, d, 2010) was a comics artist best known for his work on EC's Weird Science and Weird Fantasy comics titles (and, later, Creepy and Eerie, comics magazines that featured EC alumni). He also adapted Star Wars into comics, and worked on the newspaper strips Flash Gordon and Secret Agent X-9, both creations of Alex Raymond. He also inked various Marvel superhero comics, and was inducted into the Will Eisner Hall of Fame in 2000.

John Powers Severin (1921–2012; Will Eisner Hall of Fame, 2003), who had a "realistic" comics style,  specialized in war, western, and humor comics. One of Mad’s founding artists, he worked for with Cracked magazine for forty-five years.

Grant Geissman is a four-time Eisner Award nominee who has written several books related to EC Comics and MAD magazine, including The History of EC Comics (Taschen), Feldstein: The MAD Life and Fantastic Art of Al Feldstein (IDW), Tales of Terror: The EC Companion (Fantagraphics), and Foul Play: The Art and Artists of the Notorious EC Comics (Harper-Collins). He is also an Emmy Award-nominated guitarist/composer, having recorded with artists including Brian Wilson, Elvis Costello, and Keiko Matsui. He lives in Los Angeles.
The Life And Legend Of Wallace Wood offers a rounded portrait of a conflicted creator. Rather than a conventional coffee-table retelling of the artist’s life and career, editors Bhob Stewart and J. Michael Catron have by structuring the book as a series of essays by eminent comics scholars and talents wisely chosen to spotlight a number of different kinds of tributes to the artist ... It’s difficult to imagine a more respectful package.

This gorgeous, insightful tome is a must-have for armchair comics scholars and historians everywhere.
— Broken Frontier