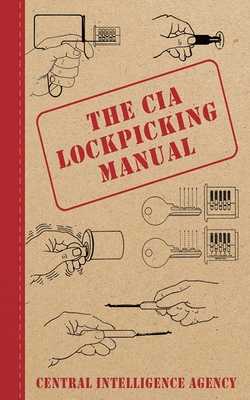 
Backordered
Yes, this is the absolutely official guide to lockpicking from the US government and the Central Intelligence Agency. This is the same information that active agents in the field use to get what they need—even when it’s locked away.

With this clever pocket- sized guide, you’ll quickly learn how to get yourself into—and out of—tight spaces. With clear explanations and detailed illustrations, The CIA Lockpicking Manual will quickly teach you what you need to know. Soon you’ll be able to get yourself into your house, office desk, or car . . . without your key. The table of contents include:

Do you have the locksmith’s phone number on speed dial? Find yourself spending a fortune on new locks after someone lost their keys again? Forgot your keys in the car one too many times? Free yourself once and for all from ever having a keyless crisis again with The CIA Lockpicking Manual.

“In this volume we will discuss not only the fundamental theories of lock picking but proper terminology, the importance of tool design (using the right tool for the right job), the effects of tolerances, and finally the techniques most commonly used by locksmiths to successfully pick the cast majority of standard pin and wafer tumbler locks.”
The Central Intelligence Agency is an independent agency responsible for providing national security intelligence to senior US policymakers. The CIA is separated into four basic components: the National Clandestine Service, the Directorate of Intelligence, the Directorate of Science & Technology, and the Directorate of Support. They carry out “the intelligence cycle,” the process of collecting, analyzing, and disseminating intelligence information to top US governmental officials. They are located in Langley, Virginia.