Stronger than Steel: Soldiers of the Great War Write to Thérèse of Lisieux (Paperback) 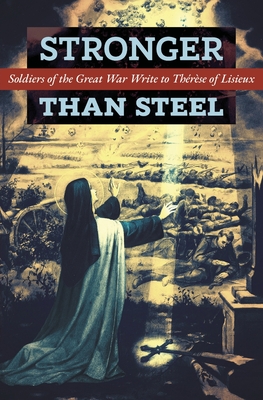 In the seventeen years between her death in 1897 and the outbreak of World War I, the fame of Th r se of the Child Jesus and of the Holy Face had spread widely, especially in France and its colonies: her autobiography The Story of a Soul was hugely popular, and soldiers carried around holy cards, medals, and relics. This remarkable collection of letters from (mostly French) soldiers fighting in the Great War and enduring its abysmal horrors are astonishing and moving testimonies of how Th r se appeared to them or spoke to them when invoked-how she miraculously protected them from "showers of iron and fire," delivered them from precipitous danger, healed them when doctors despaired, and encouraged them in the trials of battle. After all, this Carmelite-who once dressed in armor as St Joan of Arc for a convent recreational play-tells us: "Sanctity It must be won at the point of a sword ," and, during her final illness, "I will die with my weapons in my hands "

Shedding new light on the enduring mission of this beloved saint, Stronger than Steel will rekindle the reader's devotion to "the greatest saint of modern times" (in the words of her devotee, Pope Pius X). It reminds us that we are all called to the "Great War"-the spiritual war-where we are not alone against the enemy but aided by the mighty intercession of the friends of God.

This feature require that you enable JavaScript in your browser.
END_OF_DOCUMENT_TOKEN_TO_BE_REPLACED

This feature require that you enable JavaScript in your browser.
END_OF_DOCUMENT_TOKEN_TO_BE_REPLACED

This feature require that you enable JavaScript in your browser.
END_OF_DOCUMENT_TOKEN_TO_BE_REPLACED

This feature require that you enable JavaScript in your browser.
END_OF_DOCUMENT_TOKEN_TO_BE_REPLACED