The Gospel According to Luke (Paperback) 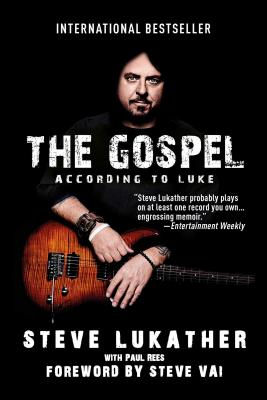 The outrageous and often hilarious autobiography of legendary session musician and lead guitarist and singer of Toto. "...one of the most entertaining rock memoirs of recent years..." - Houston Press

No one explodes one of the longest-held misconceptions of music history better than Steve Lukather and his band Toto. The dominant sound of the late ‘70s and ‘80s was not punk, but a slick, polished amalgam of rock and R&B first staked out on Boz Scaggs’ Silk Degrees. That album was shaped in large part by the founding members of Toto, who were emerging as the most in-demand elite session crew in LA, and further developed on the band’s self-titled multi-platinum debut. A string of massive hits followed for Toto while Lukather and bandmates David Paich, Jeff Porcaro, and Steve Porcaro also served as creative linchpins on some of the most successful and influential records of the era, including Michael Jackson’s Thriller.

In this incisive memoir, Lukather tells the complete Toto story. He also lifts the lid on what went on behind the closed studio doors, shedding light on the unique creative processes of some of the most legendary names in music: from Quincy Jones, Michael Jackson, Paul McCartney, Stevie Nicks, and Elton John to Miles Davis, Joni Mitchell, Bruce Springsteen, Don Henley, Roger Waters, and Aretha Franklin. Lukather’s extraordinary tale also encompasses the dark side of stardom and the American Dream. Frank, engaging, and often hilarious, The Gospel According to Luke is no ordinary rock memoir. It is the real thing.

Steve Lukather is the sole founding member of Toto who has been in the ensemble consistently over the course of the band’s entire career. Currently, he continues to tour the globe as the band’s guitarist, and as one of several singers in the group. Additionally, he is a long tenured member of Ringo Starr’s All Starr Band. From the ’70s through today, he has performed on thousands of albums and is considered one of the most prolific session players of all time.  It can be stated there is not a set of ears on Earth who has not heard a performance of Steve “Luke” Lukather.

This feature require that you enable JavaScript in your browser.
END_OF_DOCUMENT_TOKEN_TO_BE_REPLACED

This feature require that you enable JavaScript in your browser.
END_OF_DOCUMENT_TOKEN_TO_BE_REPLACED

This feature require that you enable JavaScript in your browser.
END_OF_DOCUMENT_TOKEN_TO_BE_REPLACED

This feature require that you enable JavaScript in your browser.
END_OF_DOCUMENT_TOKEN_TO_BE_REPLACED