Subterranea: Journey into the Depths of the Earth’s Most Extraordinary Underground Spaces (Hardcover) 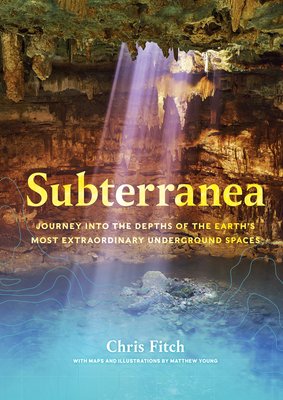 Subterranea: Journey into the Depths of the Earth’s Most Extraordinary Underground Spaces (Hardcover)


Usually Ships in 1-5 Days
"A deep dive into the mysteries of the underworld. Secret crypts, underground rivers, and engineering marvels are revealed in exquisite detail, exposing the background stories of the world's greatest hidden wonders." Jill Heinerth, author of Into the Planet

Filled with fun facts and unbelievable photography, Subterranea is a below-the-surface exploration of the world’s most spectacular underground spaces. Geographer and storyteller Chris Fitch peels back the outer layer of the earth and reveals the fascinating hidden underground spaces you can’t see from above the ground. These incredible places include poisonous caves in Mexico where the toughest fish in the world manage to survive; the magnificent Roman sunken palace that was lost beneath the streets of Constantinople for centuries; the "Door to Hell" that was accidentally created by Soviet gas explorers in the 1970s and has been on fire for nearly half a century; and the drug-smuggling tunnels between Mexico and the United States.

Lavishly illustrated and packed with maps and photographs of little-explored locations, Subterranea is the unique, untold, and utterly unforgettable story of our planet from the inside.

Chris Fitch is an author, geographer, and storyteller. He has written for publications including The Atlantic, Lonely Planet, Bloomberg CityLab and Geographical, reporting from Kenya to New Zealand, Israel to the Galápagos Islands, covering global stories on climate change, ecological urbanism, wildlife conservation, cultural revitalisation, sustainable development, geopolitics, science, travel, and more. Born in London, he now lives in Lisbon, Portugal. Follow him at @chrisfitchchris.

“With stunning photos, illuminating cartography, and well-crafted narratives, Subterranea takes readers on a deep dive into the mysteries of the underworld. Secret crypts, underground rivers, and engineering marvels are revealed in exquisite detail, exposing the background stories of the world's greatest hidden wonders.” ―​Jill Heinerth, author, Into the Planet

“With evocative maps and stunning photography, Subterranea shows that the underground realm is just as captivating as the above-ground world around us.” ―Daily Mail

“A great way to escape from the outside world by diving into the depths of another.” ―How It Works

“An original and timely odyssey into our mysterious underworld.” ―Nicholas Crane, presenter of BBC2's Coast and Great British Journeys

“A home-run hit with history buffs, science lovers and curious people all over the world!  Buy this as a gift for an inquisitive loved one and make sure you buy one for yourself as well.” —The Book Review Crew

“A fascinating tour of what lies beneath: ancient caves and tunnels, modern subway systems, even an underground city in Australia – complete with historical information, co-ordinates, and detailed maps for the intrepid explorer." —The Globe and Mail