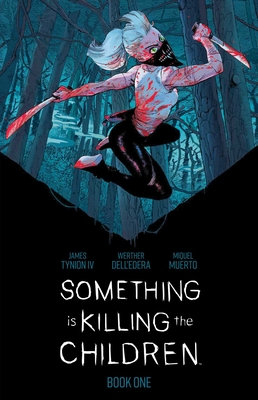 
Usually Ships in 1-5 Days
The definitive collection of Something is Killing the Children's entire “Archer’s Peak” saga collected for the first time in a single deluxe hardcover.

WHAT IS ABDUCTING THE CHILDREN OF ARCHER’S PEAK? When the children in a sleepy Wisconsin town begin to go missing all hope seems lost. Most children never return, and those that do have terrible stories of terrifying creatures that live in the shadows. But even monsters fear the mysterious stranger that arrives shortly after. She believes the children and claims to be the only who sees what they can see. Her name is Erica Slaughter. She kills monsters. This is all she does, and she bears the cost because it must be done. The definitive collection of the entire “Archer’s Peak” saga for the first time in a single volume, this deluxe edition hardcover includes Something is Killing the Children #1-15 by GLAAD Award-winning writer James Tynion IV (Department of Truth, Batman) and artist Werther Dell-Edera (Razorblades).
Werther Dell'Edera (born January 1, 1975) is an Italian comic book artist who provided interior art for the unreleased comic Aliens: Colonial Marines - Rising Threat for Dark Horse Comics, as Well as Marvel Comics, and BOOM! Studios hit Something is Killing the Children.