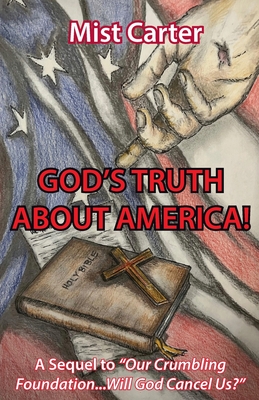 "Then if my people who are called by my name will humble themselves and pray and seek my face and turn from their wicked ways, I will hear from heaven and will forgive their sins and restore their land." 2 Chronicles 7:14 (NLT)

The previous book, Our Crumbling Foundation-Will God Cancel Us? shed much-needed light on the unraveling of our beloved nation since January 20, 2021. Yet that book only covered the destructive acts that the Biden administration had pulled off in just the first four months of his presidency.

Since then, the ruinous acts continued and were amplified-and Americans were suffering. Deception, corruption, lies, and propaganda poured out of this administration, as well as the fake-news media and overbearing Big Tech companies. The sequel, God's Truth About America had to be written.

God's Truth About America exposes the truth and myths about our economy, rampant crime, our border crisis, our failing education system, our weak foreign policies, voter fraud, and an in-depth examination of lies regarding COVID-19.

God has provided us with opportunity to look past the fa ade the radical left Marxists are exposing us to, seek the truth, and take back our republic. Yet, unless we, the people, seek His truth, return our complete allegiance to Him, and rely on His strength and guidance, we will fail. God has slowly been removed from so much in our nation, but that pace is accelerating. We need God's Truth About America and His partnership. Let's humble ourselves, pray, seek His face, and turn from our evil ways, and He will restore our land.

Proceeds from sales of this book will go to Tunnel 2 Towers.