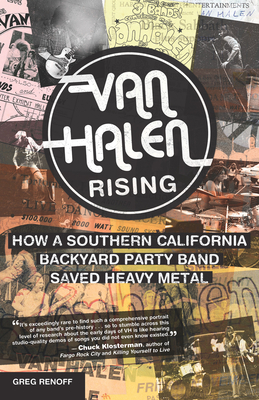 The bestselling, vivid and energetic history of Van Halen's legendary early years featuring 230 original interviews -- including with former Van Halen bassist Michael Anthony and power players like Pete Angelus, Marshall Berle, Donn Landee, Ted Templeman, and Neil Zlozower "Fascinating (even for non-VH fans) ... A book almost anthropological in its level of detail." -- Vulture "It's the tale of hardworking kids with nothing in common learning to fuse pop and heavy metal into a new sound that completely changed the music world. It also vividly shows that the personality clashes that would later destroy the band were there from Day One." -- Rolling Stone "A fascinating read." -- Pasadena Star News "The book is fantastic." -- Ted Templeman, Grammy-winning music producer for Van Halen and David Lee Roth "If you've got it bad, got it bad, got it bad for Van Halen, get Van Halen Rising." -- Martha Quinn, original MTV VJ, Sirius XM host After years of playing gigs everywhere from suburban backyards to dive bars, Van Halen -- led by frontman extraordinaire David Lee Roth and guitar virtuoso Eddie Van Halen -- had the songs, the swagger, and the talent to turn the rock world on its ear. The quartet's classic 1978 debut, Van Halen, sold more than a million copies within months of release and rocketed the band to the stratosphere of rock success. On tour, Van Halen's high-energy show wowed audiences and prompted headlining acts like Black Sabbath to concede that they'd been blown off the stage. By the year's end, Van Halen had established themselves as superstars and reinvigorated heavy metal in the process. Combining exhaustive research and original interviews, Van Halen Rising reveals the untold story of how these rock legends made the unlikely journey from Pasadena, California, to the worldwide stage.

Greg Renoff was born in the Bronx, New York, and grew up in New Jersey. Renoff earned his Ph.D. in American history from Brandeis University and is the co-author of Ted Templeman: A Platinum Producer's Life in Music. He lives in Tulsa, Oklahoma, with his wife and two daughters.

This feature require that you enable JavaScript in your browser.
END_OF_DOCUMENT_TOKEN_TO_BE_REPLACED

This feature require that you enable JavaScript in your browser.
END_OF_DOCUMENT_TOKEN_TO_BE_REPLACED

This feature require that you enable JavaScript in your browser.
END_OF_DOCUMENT_TOKEN_TO_BE_REPLACED

This feature require that you enable JavaScript in your browser.
END_OF_DOCUMENT_TOKEN_TO_BE_REPLACED