Fit for Freedom, Not for Friendship: Quakers, African Americans, and the Myth of Racial Justice (Paperback) 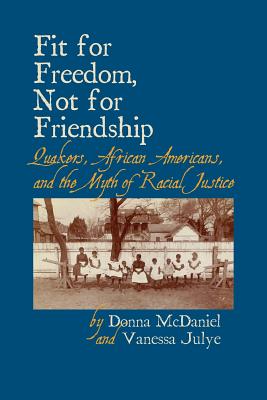 Fit for Freedom, Not for Friendship: Quakers, African Americans, and the Myth of Racial Justice (Paperback)

The Religious Society of Friends (Quakers) has been reputed to have opposed enslavement and later racial injustices. Many members, however, enslaved people of African descent, and Quaker attitudes toward African Americans since have generally reflected the culture at large. To some extent, then, the Quaker story has lessons for us all.

Most Quakers did not become involved in the process of banning enslavement until 1760, after thirty years of taking only minimal steps to end Quaker participation in it. The process ultimately took another twenty years to complete. The Quaker stance against enslavement, however, was singular. No other Christian denomination of notable size at the time required its members to end the practice.

Donna McDaniel and Vanessa Julye document three centuries of Quakers who were committed to ending racial injustices yet, with few exceptions, hesitated to invite African Americans into their Society. Addressing the insidious and complex racism among Quakers of yesterday and today, the authors believe, is the path toward a racially inclusive community.