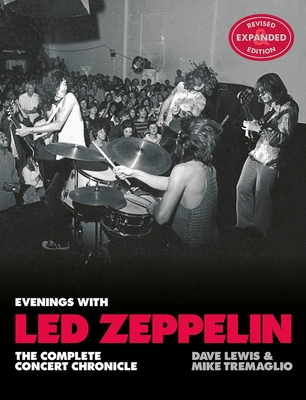 
Usually Ships in 1-5 Days
Evenings with Led Zeppelin chronicles the 500-plus appearances Led Zeppelin made throughout their career. From their earliest gig in a Denmark school gymnasium on September 7, 1968, through to the last gig that Jimmy Page, Robert Plant and John Paul Jones ever performed with John Bonham, in Berlin on July 7, 1980, this is the Led Zeppelin story told from where their legend was forged - on stage.

Impeccably researched by Dave Lewis and Mike Tremaglio, Evenings with Led Zeppelin traces the group's rapid ascent from playing to a few hundred at London's Marquee Club to selling out the 20,000 capacity Madison Square Garden in New York - all in a mere 18 months.

Illustrated throughout with rarely seen concert adverts, posters, venue images, ticket stubs and photos, this is Led Zeppelin as never chronicled before - now in a fully revised, updated and expanded edition, which includes:

- 55 concert entries with new, expanded text, new images and information;
- 55 concert entries now include new press concert previews & reviews (many with images);
- 100 concert tickets added;
- 75 concert adverts added;
- 25 concert photos added;
- 20 handbills/posters images added;
- 20 miscellaneous images (programs/membership cards/press releases/contracts/venue pics, etc.) added;
- 11 new unconfirmed or cancelled Led Zeppelin gigs added;
- 11 pre-Zep 1968 concert listings added;
- 10-page concert bootleg CD discography added to the Appendix section.
Dave Lewis first heard the music of Led Zeppelin in 1969 at the age of 13. The effect has been a lasting one. He is acknowledged and respected throughout the world as a leading chronicler of the group and its individual members. Dave is the editor and founder of the acclaimed Led Zeppelin magazine Tight But Loose. Established in 1978, it reaches out to Led Zeppelin fans in over 20 countries across the world. In 2015 Dave contributed the liner notes to the official Led Zeppelin release The Complete BBC Sessions. Dave has been lucky enough to attend 15 Led Zeppelin concerts. He has attended various Jimmy Page and John Paul Jones gigs and has witnessed Robert Plant perform live on over 100 occasions. Mike Tremaglio is one of the foremost Led Zeppelin researchers and has chronicled their work over many years in print and on the web. For many years, he wrote popular tour retrospectives for the highly regarded Tight But Loose magazine. He has also contributed significantly to several of co-author Dave Lewis's books and magazine features.