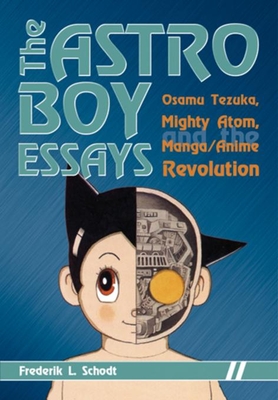 The pioneering genius of Japan's "God of Comics," Osamu Tezuka (1928-89), is examined through his life's masterwork: Tetsuwan Atomu, also known as Mighty Atom or Astro Boy, a comic series featuring a cute little android who yearns to be more human. The history of Tetsuwan Atomu and Tezuka's role in it is a road map to understanding the development of new media in Japan and the United States. Topics include Tezuka's life, the art of animation, the connection between fantasy robots and technology, spin-offs, and Astro Boy's cultural impact.

Frederik L. Schodt is a translator and author of numerous books about Japan, including Manga Manga and Dreamland Japan. He often served as Osamu Tezuka's English interpreter. In 2009 he was received the The Order of the Rising Sun, Gold Rays with Rosette for his contribution to the introduction and promotion of Japanese contemporary popular culture.

Fluent in spoken and written Japanese, Frederik L. Schodt is an author, interpreter, and translator who has written extensively on Japanese culture and Japan-U.S. relations. His classic Manga! Manga! introduced the English-speaking world to Japanese comics culture.