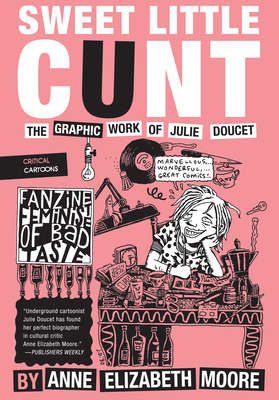 
Usually Ships in 1-5 Days
EISNER AWARD WINNER Best Academic/Scholarly Work About Comics 2019 One of the most influential women in independent comics, Julie Doucet, receives a full-length critical overview from a noted chronicler of independent media and critical gender theorist. Grounded in a discussion of mid-1990s media and the discussion of women's rights that fostered it, this book addresses longstanding questions about Doucet's role as a feminist figure, master of the comics form, and object of masculine desire. Doucet's work is hilarious, charming, thoughtful, brilliant, and challenging, even three decades on.
Anne Elizabeth Moore is an award-winning journalist, bestselling comics anthologist, and internationally lauded cultural critic. Her most recent book, Body Horror, is on the Nonfiction Shortlist for the 2017 Chicago Review of Books Nonfiction Award, was named a Best Book of 2017 by the Chicago Public Library, and was nominated for the 2018 Lammys. She teaches at the School of the Art Institute of Chicago and the College for Creative Studies. She was born in Winner, SD, and resides in Detroit with her cat. Praise for Body Horror: " Body Horror is] scary as fuck and liberating. . . . Moore connects the dots that you did not even think were on the same page." --Viva la Feminista