The Rise of the Rest: How Entrepreneurs in Surprising Places are Building the New American Dream (Hardcover) 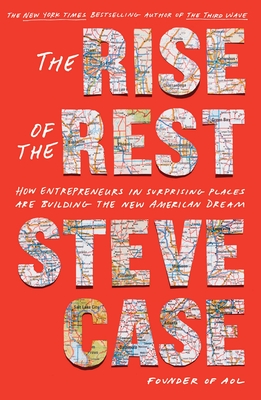 The Rise of the Rest: How Entrepreneurs in Surprising Places are Building the New American Dream (Hardcover)

In 2014, Steve Case launched Revolution’s Rise of the Rest, an initiative to accelerate the growth of tech startups across the country. Rise of the Rest is based on a simple idea: cities can be renewed and rise again if they develop a vibrant startup culture. A visionary entrepreneur himself, Case believes that great entrepreneurs can be found anywhere, and can thrive with the proper support and investment. In fact, they’re key to the American DNA. After all, America itself was a startup. It struggled to get going and almost didn’t make it. Today it’s the leader of the free world, in part because it has the world’s largest economy—a testament to several generations of pioneering entrepreneurs. But America needs help keeping its promises, as it is harder today for innovators who live outside the major tech hubs. For most of the past decade, seventy-five percent of venture capital has gone to just three states—California, New York, and Massachusetts—while the forty-seven states making up the rest of the country have been forced to share the remaining twenty-five percent. And it’s even harder for some people no matter where they live. Less than ten percent of venture capital currently goes to female founders, and less than one percent to Black founders. Since new companies—startups—are responsible for net new job creation, it is essential that entrepreneurs everywhere have the opportunity to start and scale companies. Rise of the Rest is about leveling the playing field for everybody, and in the process creating opportunity and jobs for the people and places that have been left behind. This book tells that story and provides a hopeful perspective on the future of America.

In The Rise of the Rest: How Entrepreneurs in Surprising Places are Building the New American Dream, Case takes readers on an exhilarating journey into the startup communities that are transforming cities nationwide. Rise of the Rest’s signature road trips, on a big red tour bus, have created significant local and national buzz and spotlighted communities large and small that have committed to a new tech-enabled future. Along the way, Case introduces readers to dozens of entrepreneurs whose inspirational stories of struggle and achievement match the most iconic examples of American invention.

To date, Case has traveled to forty-three cities on his Rise of the Rest bus tour and has been featured on 60 Minutes, and in The New York Times, USA TODAY, Fast Company, and The Wall Street Journal. With dedicated venture funds, backed by an iconic group of investors, executives, and entrepreneurs including Jeff Bezos, Eric Schmidt, Meg Whitman, John Doerr, Sara Blakely, and Ray Dalio, Rise of the Rest also invests in the most promising high-growth startups located anywhere in the US outside of Silicon Valley, New York City, and Boston. The fund has invested in more than 175 companies across more than eighty cities, including: Phoenix, Chattanooga, Chicago, Denver, Detroit, Louisville, Baltimore, Columbus, St. Louis, Green Bay, Madison, Buffalo, Kansas City, Minneapolis, Cincinnati, Miami, Dallas, Salt Lake City, Omaha, Atlanta, Pittsburgh, Nashville, Indianapolis, New Orleans, and dozens of others.
Steve Case is one of America’s best-known and most accomplished entrepreneurs, and a pioneer in making the internet part of everyday life. He cofounded America Online in 1985, when just three percent of people were online for an average of just one hour a week. He saw the possibilities of the digital future and built AOL into the largest and most valuable internet company in the 1990s (and the first internet company to go public). Case’s passion for helping entrepreneurs remains his driving force. He was the founding chair of the Startup America Partnership—an effort launched at the White House in 2011 to accelerate high-growth entrepreneurship in every region of the country. Case also was the founding cochair of the National Advisory Council on Innovation & Entrepreneurship, and a member of President Obama’s Council on Jobs and Competitiveness, where he chaired the subcommittee on entrepreneurship.  He was active in passing the bipartisan JOBS Act in 2012, which made it easier for startups to raise capital. His engagement on policy led Politico to name him “Washington’s tech whisperer” in 2017.  As chairman and CEO of Revolution, a Washington, DC-based investment firm he cofounded in 2005, Case partners with visionary entrepreneurs to build businesses such as Zipcar, Sweetgreen, Clear, Tempus, DraftKings, and many others. Case also serves as chair of the Smithsonian Institution, which under his leadership has launched a bold effort to make the best of the Smithsonian available to every home and classroom. He is also Chairman of the Case Foundation, and with his wife Jean was among the first to commit to The Giving Pledge, dedicating a majority of their wealth to charitable causes.
“An iconic entrepreneur shows how a new generation of American business leaders is taking shape in the vibrant cities of the heartland. . . . Inspiring stories from unexpected places showing that the entrepreneurial spirit is alive and kicking.” —Kirkus Reviews

“It seems that if we can light an entrepreneurial fire under the rest of the country, we can have broader prosperity. Perhaps Mr. Case will provide the spark.” —Wall Street Journal

“I’ve spent my life telling stories about America, and the role of pioneers cannot be overestimated. A new chapter in America’s story is now being written in cities all across the nation, as a new generation of innovators build new companies and help rebuild communities. Steve’s book tells those riveting stories, and gives us hope for America’s future.” —Ken Burns, award-winning documentary filmmaker and CEO of Florentine Films

“The Rise of the Rest is a vivid and eye-opening look at the surprising acts of innovation and reinvention that are often left out of the media’s spotlight. Steve Case captures the incredible stories of entrepreneurs from all walks of life who are redefining the American dream.” —Tory Burch, executive chairman and chief creative officer, Tory Burch LLC; founder, Tory Burch Foundation

“In The Rise of the Rest, Steve Case takes us behind the scenes in cities across the country, where a new generation of innovative companies are being born and thriving. Through his up-close stories of startup founders, investors, policymakers, and business leaders, Case unveils a vision of a more inclusive America, where Silicon Valley no longer has a monopoly on innovation.” —Ray Dalio, cofounder of Bridgewater Associates and #1 New York Times bestselling author of Principles

“Steve Case played a pivotal role in getting America online, but his efforts over the last decade to create opportunity for more people in more places will be his most important legacy. I’ve seen firsthand the power of Rise of the Rest to empower entrepreneurs, revitalize communities and bring people together. This captivating book will give you hope for the future of America.” —José Andrés, chef and founder of World Central Kitchen

“Although I represent Silicon Valley in the U.S. Congress, I’ve long believed that we need to democratize innovation so we are creating tech jobs in dozens of cities, not just a few. Nobody in America has been a more visible and tireless advocate for this than Steve Case, and The Rise of the Rest illustrates an exciting and optimistic path forward for a more inclusive and united America.” —Ro Khanna, member of Congress from Silicon Valley

“Steve Case, one of America’s most successful entrepreneurs, has spent much of the past decade supporting the next generation of entrepreneurs, in dozens of cities all across the country. The Rise of the Rest is a must read, as it provides a hopeful and optimistic view of America’s future.” —David Rubenstein, cofounder of the Carlyle Group

PRAISE FOR THE THIRD WAVE:

“In The Third Wave, Steve Case has drafted a compelling roadmap for the future—one that can help us make sense of the technological changes reshaping our economy and the world. A fascinating read.”
—Sheryl Sandberg, Facebook COO and founder of LeanIn.Org

“I've been waiting to read Steve's story and I wasn't disappointed. His business career is straight out of Horatio Alger and carries important lessons for all entrepreneurs.”
—Warren Buffett, CEO, Berkshire Hathaway

“We are at the beginning of the next industrial revolution where the combination of software and industrial machines is building the foundation for a new wave of innovation. With clarity and passion, Steve provides a manifesto for the future of innovation and entrepreneurship. It's a must read from a visionary leader for entrepreneurs, corporate executives, and anyone trying to succeed during the Third Wave."
—Jeff Immelt, former Chairman and CEO, GE

“The Third Wave is essential reading for leaders in business and government, as well as for anybody trying to make sense of our rapidly changing world. I’ve worked with Steve for two decades, and I've always been impressed with his intellect and captivated by his insights. If you read this book, you will be, too.”
—General Colin Powell, former Secretary of State (and former AOL board member)

“Steve Case made history when he created America Online and introduced the Internet to the world. Steve's startup story is captivating, and chock full of important insights and lessons. But this is not a book about the past; it’s a bold and compelling vision for what’s coming next. The Third Wave is required reading for every entrepreneur.”
—Brad Feld, co-founder, TechStars and Foundry Group, author of Startup Life

“A true visionary, Steve Case understood years ago the tectonic shifts that were to occur in society, fueled by technology and acted with purpose and passion. Case’s book, The Third Wave, clarifies for leaders the decisions necessary to thrive in a future increasingly disrupted by accelerating knowledge-creation and sharing.”
—Alvin and Heidi Toffler, authors of the original The Third Wave

“The Third Wave is an indispensable book for understanding the history of the Internet and preparing for what's next. Entrepreneurs looking to build truly transformational businesses should listen closely to Steve Case's insightful advice.”
—Brian Chesky, Co-founder and CEO, Airbnb

“An extraordinarily frank and incisive book from an extraordinary business leader. All budding entrepreneurs, and all who care about the future, should read The Third Wave and heed the lessons as well as the insights.”
—David Rubenstein, Co-founderand Co-CEO, The Carlyle Group

“What’s new and noteworthy here is Case’s effort to draw a connection between his own history and an impending era of change. Moreover, he’s particularly thoughtful on the subject of how digital innovation and existing regulatory regimes will need to work together in the coming decades. . . . There’s little doubt that Case’s insights have value.”
—Jon Gertner, The Washington Post

“Case believes the third wave, which is only just beginning, will have far more impact as the internet transforms real world sectors such as healthcare, education, transport and energy. He shows how existing technologies can be deployed far more smartly rather than assuming that we will see further heroic breakthroughs.”
—Financial Times