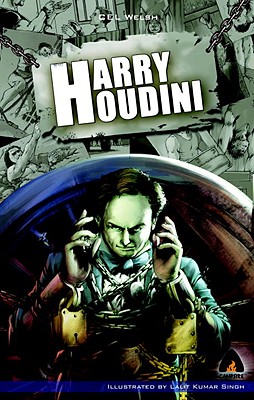 This is the life story of Ehrich Weiss. If you don't recognize this man's name, that is because the world came to know him as the one and only Harry Houdini.

George Bernard Shaw once remarked that Harry Houdini is the third most famous name in history after Jesus Christ and Sherlock Holmes. While that might be a bold and debatable statement, there is no doubt that Houdini is the most famous magician to have ever lived. Almost a hundred years after his death, his name is still synonymous with death-defying stunts and unimaginable escapes.

His ability to get out of seemingly impossible situations, along with his knack of dealing with the public and the press, made him a legend in his own time. Some of his most notable escapes, which still cannot be explained, were the Mirror Handcuff Challenge, the Milk Can Escape, the Chinese Water Torture Cell and the Suspended Straitjacket Escape.

How did a poor, uneducated boy rise out of poverty and become the greatest illusionist of the 20th century? The story of Houdini's life is not only entertaining, but also educational. His struggles in life and his determination to succeed are a lesson to all.

CEL Welsh is an American freelance writer who owes comic books a great deal. He first read one over his brother's shoulder, thrilled by Spiderman battling super-villains, and struggling with maintaining a secret identity. Through comics he learnt a great deal about heroism, literature, storytelling and writing. When graphic novels - huge comic books with profound and satisfying stories - came along in the 1980s, he fell in love with them.

"I highly recommend Campfire’s comics. They do what they are intended to do and do it in  a way that excites kids about classic literature."

— Chris Wilson, The Graphic Classroom (a resource for teachers and librarians)