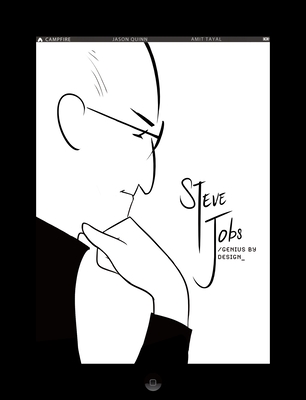 iMac, iTunes, iPod, iPhone, iPad, iCon! Steve Jobs and his inventions changed the world we live in. His extraordinary life story is brimming with passion, innovation and creative genius. Share his triumphs and failures, as we journey from his birth and his adoption, through the advent of the computer age and on into the digital age. Forced out of the company he created, his indomitable vision allowed him to change the world of computers, movies, music and telecommunications. Prepare to be inspired, by a man who dared to think different...

Jason Quinn was born in Liverpool, England. He learned to read with Marvel Comics and was devastated when his teachers told him that Spider Man did not exist. He has worked for Marvel UK and Panini, editing and writing their Spectacular Spider Man comic, along with just about everything else from Barbie to Action Man. In 1998 he was voted 'Sportsman of the Year' by the Boars Head Soccer Club. He then moved to Pinewood Studios, England, home of the James Bond movies, where he worked in children's television, scripting and developing programs for kids.


"This cleverly designed volume provides a concise but well-balanced view of Steve Jobs the wunderkind, including his difficult personality and complex genius. . . . With its attention to both the personal and the public, this is an excellent starting place to find a concise overview of a complex man’s influences and influence." — Booklist

"An unsparing yet also very human graphic depiction of Steve Jobs’ life.
It is no secret that Jobs was a hard case, but Quinn’s work displays him in all his tempestuousness: as extreme and antagonistic as he was meticulous and inspired. Tayal’s smartly paced, round-edged, clean panels convey the tension and urgency Jobs brought to his projects, his brash and abrasive exterior balanced by thought bubbles that reveal even rawer emotions and a drive that feels combustible. What is particularly effective here is the creation of the Apple world, one in which Jobs would be pivotal, but with other significant players, many of whom get the full-flesh treatment from Quinn, such as uber-geek Steve Wozniak and design whiz Jony Ive, and the business guys Mike Scott and John Sculley. Jobs’ family is gradually brought into the fold, as are his fascinations with diet and Zen Buddhism and the unfortunate notion he held that he didn’t have to bathe but once a week thanks to his mucusless eating habits. By the end of the story, it is clear where Jobs fit into the Apple picture, with all his imperfections amid the perfectionism.
"Jobs was a difficult character, but it was his very restlessness, which Quinn plays like a fiddle, that helped change how we live in the world."   — Kirkus Reviews

"One of the most interesting and short biographies I have ever read . . . an unusual tribute for an unusual icon, and indeed, a befitting one . . . The book is a page-turner and both the text and illustrations are handled deftly  . . . This biography resembled more of fiction than non-fiction and that's what sets it apart from other books in the category." -- Hindustan Times